Around 30 million people will see their monthly wages rise when changes to National Insurance contributions take effect on July 6.

The income threshold for paying the tax will be increased from £9,880 to £12,570, meaning a lower proportion of people’s wages will be subject to it and 2 million people will be exempt from paying in total.

For many, the change negates the impact of the 1.25% rise in National Insurance introduced in April, which was a year-long levy to fund social care in the UK.

Anyone earning less than around £35,000 will see their wages return to around the same level as before April.

For some taxpayers, the threshold changes will undo the increase in NI they have faced since April due to the 1.25% tax hike

For high earners, this is not the case, however, and most will still be paying more NI dues than they did in March.

Sarah Coles, senior personal finance analyst at Hargreaves Lansdown, said: “Any tax cut is welcome at this time, especially one that eases the pain of those on low incomes.

“They have faced the brunt of the rising cost of basic necessities as this accounts for a greater proportion of their expenditure so they need all the help they can get.

“It’s a drop in the ocean compared to rising costs. So while it will help with a little pain relief, low-income people will still have a huge headache to make ends meet.

Why are the changes happening now?

It’s been something of a roller coaster for NI over the first half.

In September last year, the Prime Minister announced a 1.25% increase in National Insurance, taking effect in April, as a levy to fund social care.

Then, in this year’s spring statement, the Chancellor unveiled plans to raise the threshold at which workers start paying NI contributions from £9,880 to £12,570, bringing it in line with the level at which people start paying income tax.

HMRC said it would reduce payments for around 30 million people across the country and exempt 2 million from all payments. 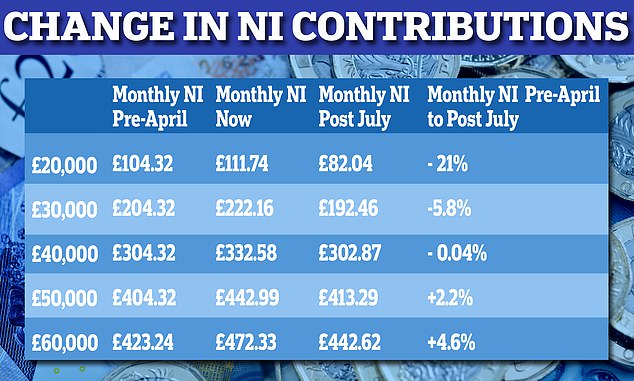 So if your gross annual income was £30,000, in March this year you would have paid £204.32 a month in National Insurance contributions.

Meanwhile, high earners will pay more. Nearly a third of working taxpayers will still pay more NI than before March.

Coles said: “At the same time, while we have been distracted by NI hikes and cuts, freezing income tax thresholds has inflicted more damage. The Institute for Fiscal Studies estimates that by 2025/26 the freeze will effectively be a 16.4% real reduction in thresholds.

By the time we’ve gone through four years of threshold freezes, in 2025/26, almost all workers will pay more tax

“In the current tax year, when you add the rise in the NI and the shift in the threshold to the freezing of the income tax thresholds, the IFS estimates that only those who earn between 10,000 and 25 £000 or so will pay less tax.

“Over the next tax year, we expect a reduction in the basic income tax rate. However, despite this, by the time we have experienced four years of threshold freezes, in 2025/ 26, almost all workers will pay more taxes.

Jo Bateson, tax partner at KPMG UK, added: ‘In March 2021, the Chancellor announced that personal benefit brackets would be frozen for four years, meaning an additional 1.3 million people would be subject to the tax by 2026.

“The announcement of the Health and Social Care Tax in September 2021 added an additional 1.25% for taxpayers with income or dividends, which affects most of those earning over £40,000.

Why people are buying insurance during the pandemic

THERE is no doubt that the ongoing pandemic has turned our world upside down. We found ourselves doing things we didn’t do before the pandemic, like wearing face masks or observing physical distancing or working and studying from home. We prioritize and deprioritize items on our checklist, moving non-essentials to essentials. What we used to […]

Families who feel the pressure now will feel the pressure even more in a few months. Millions of households will find it harder to balance their family budget in April as they face a series of increases in household bills. Interest rates have also risen, putting pressure on those with certain types of mortgages or […]