Rising inflation has put the global economy in limbo. With 57% of the world’s population expected to live in cities in 2022, the rising cost of living is expected to put urban consumers in a precarious position, especially in low-income cities where a high share of the consumer budget is spent on essentials such as food and soft drinks and housing. Food prices soared as supply chain disruptions caused by the war in Ukraine and the COVID-19 pandemic led to unprecedented increases in commodity prices. Yet economic empowerment remains a key tool to mitigate high-need spending, as several rapidly growing emerging and developing cities demonstrate.

Source: Euromonitor International based on national/UN/Eurostat/OECD statistics
Note: The share of basic necessities includes expenditure on food and non-alcoholic beverages, housing, and clothing and footwear as a percentage of total household expenditure. Inflation in 2022 is forecast

Rising inflation stretches consumer budgets. In 2022, many cities are expected to experience double-digit annual inflation, including Tehran and Lagos, two megacities with more than 10 million people and some of the highest spending rates on basic necessities such as food. and transport.

Food remains one of the main household expenditure groups in less affluent cities. In several cities in sub-Saharan Africa, food and non-alcoholic beverages accounted for more than 40% of a household’s budget in 2021. This contrasts with cities in advanced economies where food expenditure covers a smaller share that ranges from about 8 to 15%. With record food price increases, consumers in poorer cities face daunting challenges in 2022. According to the Food and Agriculture Organization of the United Nations (FAO), its Food Price Index averaged 159.3 points (base year 2014-2016=100) in March 2022. increased by 17.9 percentage points from the previous month and reached its highest level since its inception in 1990. This includes record increases in the price of commodities such as wheat and coarse grains following export disruptions caused by the war in Ukraine.

Rising food prices were already an issue before 2022, with cities facing supply chain disruptions due to the COVID-19 pandemic. For example, in Shanghai, the consumer price index (CPI) for food and non-alcoholic beverages rose 1.7% year-on-year in 2021, compared to an average of 1.0% across all categories. budgets. A similar pattern was observed in other cities. In 2021, in more than 1,000 cities, more than 80% recorded higher increases in consumer prices for food and non-alcoholic beverages compared to the average increase in all budget categories. In Tehran, where US sanctions have caused the rial to depreciate against the dollar, inflation has led to a huge rise in commodity prices.

Protecting the poorest with economic measures is essential, but financial empowerment remains the best tool to mitigate vulnerability to inflation

In times of rising inflation, protecting the poorest is paramount. This may involve reducing consumption taxes such as VAT, providing subsidies to cushion the rise in prices of certain basic necessities such as food, housing and transport, and offering direct cash transfers to the poorest households. For example, in British Columbia, Canada, a maximum rent increase has been capped at 1.5% in 2022 by the local government to protect tenants from rising housing costs.

However, financial empowerment remains a more powerful tool to mitigate inflation vulnerability. Proportionately low household spending on basic necessities provides urban consumers with greater flexibility to cope with price increases, helping to reduce the risk of households cutting back on spending on basic necessities such as food , housing, clothing and footwear. A number of cities in the emerging and developing world that have benefited from economic growth over the past two decades have seen a change in the consumption habits of their residents. For example, in Shanghai, the share of consumer spending on food and non-alcoholic beverages has increased from 23% in 2005 to 17% in 2021. The city has experienced strong economic growth that has increased consumer incomes and contributed to produce a new middle class that spent more. on recreational activities and less on necessities as a share of total expenditures. 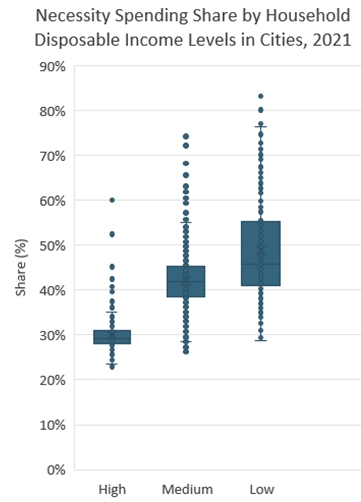 For more information, read our report “Consumer Cities 2022: Where to Look for Opportunities?”

The Treasury has suspended financial support during the cost of living crisis in the belief that households will be able to use their savings to weather the storm, Whitehall insiders have said. The Independent. The money people failed to spend while cooped up at home during the pandemic was cited in discussions between Chancellor Rishi […]

Damakant Jayshi After the coronavirus pandemic hit educational institutions across the country, Congress authorized billions of dollars in COVID-19 relief to help them continue operating or reopen through three projects recovery law between March 2020 and March 2021. Wisconsin schools’ share of the Elementary-Secondary Education Emergency Relief Fund (ESSER) is more than $2.3 billion, according […]

Cost of living: see how much your expenses have increased over the past five years | UK News

Prices have risen faster in the past 12 months than at any time in the previous 30 years, putting pressure on already strained household budgets. the latest increases were driven by rising energy and fuel costs for households. But how much have your individual expenses increased over the past five years? Use our new calculator […]